Ate and were happy: the strange and "terribly delicious" snacks Soviet times

They say that taste preferences are formed in childhood, and it greatly influences the formation of the society, the predominance of one or other products in the public domain, their price, labor costs for the preparation, cultural (not just culinary) traditions society.

Here to take, at least, pancakes. We eat them not only because the pancakes - a hearty (and delicious Nam). There are Mardi Gras, which is the tradition to cook and eat pancakes oblige. In this case, the pancakes in one form or another are found in kitchens around the world. But do not try to feed the foreigner our Maslenitsa pancakes: many only on the species, are horrified. I've met such.

I, for example, no way will not try centenary eggs... Or eggs with embryos. But China's century-old eggs gladly crack, they say - delicious. A hakarl? I only have the scent of his kills - directly on approach.

The funny thing is, the taste preferences are changing very quickly - if the direction of their development coincides with the main cultural and culinary vector (clumsily put it, but oh well). Here centenary eggs hakarlom we have not yet taken root, and all sorts of sushi rolls, transformed under the local realities, burgers (well as the usual burger in a bun, but with vegetables), sandwiches - they please, came into use firmly.

And now, today's children turn up their eyebrows in horror when they start to talk about snacking Soviet times and screaming in horror

I remember once a friend asked a question from the yard - he jumped out for a walk with a huge Gorbushka black bread, sprinkled with sugar and watered vegetable oil.

Something similar often digging myself, however, I used a loaf.

Well, I tried, of course, and really delicious!

Then on black bread we often smeared with jam from the black currant. Here I do not know why, but it is this combination like the most.

Do you remember the "sandwich" of the cookie, when one pechenyuha spreadable butter and cover the other one? The most advanced can add in the middle of a jam, but there was inconvenient - it is squeezed. So, I once suggested a "sandwich" son try, he looked at me with arrogance sympathetic podzaevshegosya modern child - say, you that there is no even chocolate!

I told him - tasty, he said to me, this is you in those times of famine, it was delicious.

Hmm. I, for example, can not say that times were hungry. Very well-fed. But another well-fed.

We could devour bread still warm from the nearby bakery bank bulls in tomato sauce. This conservative such fish and gobies - fish rather than beef (maybe someone does not know). At the same friend once tried tyuryu - interesting dish of soaked crackers who own drying his grandfather. Crackers were tucked onions, garlic, herbs, oil and vinegar duck. In general - a classic Russian cuisine, or rather, a variant of the old Russian cuisine.

So in fact offer it now - people waving hands begin, they say, for whom are you taking us. In Soviet times, it was tyurya already exotic - it only old people remember. So that's just an example of evolution as the kitchen and taste preferences.

And you something such things Do you remember? That before - it was delicious, but now - do not understand? 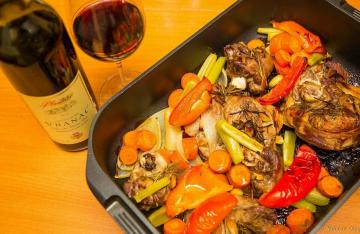