Autumn - time soup, anyway. Even those who are not like them, no, no yes and think to use a plate, especially when they come from the street. I do not know about you, but we have the window - rawness crashing piercing wind. Even going out is not necessary, to imagine that there, on the street, and immediately freezes to the bone.

So hot, thick, hearty soup with a rich flavor - the exact opposite of light summer - there have to be just right. First - the soup is actually perfectly warm, and secondly - gives good calories that the body in the cold simply necessary.

Well, because, Crazy, retro, remember the most are the most recipes are delicious, or unusual?

Here just want to say, classical and correct prescription halophytes in the fact that neither has a chamber of its kind, does not exist. Solyanka - this dish, first, international, in the second - quite snobbish.

Salsola may be either thick (second dish) and liquid. And in general, cooked her once on the principle - all that is, all in a pot and put, because later, with the emergence of a science of cooking, called them her team. And until the science of cooking, in no such "Domostroi" She did not mention, and for a long time as the time was the second dish, but not soup.

Presumably, the "Manual book Russian experienced hostess" Ekaterina Avdeeva, published in the mid-19 century, first introduced to the general public prescription-kasha soup, and it began its triumphant march. A before solyanka was hot thick (second) dish of cabbage, pickles, meat, poultry, fish - all that was available to taste flavored vinegar or brine. On the Internet saw the recipe for this dish of "Dictionary of Cookery, prispeshnichego, kanditorskogo and distillatorskogo" Vasily Levshin, and this dictionary, as I remember, dating from the late 18th century.

But today (I repeat) of soup.

Each family and each recipe cook a kasha, and - ta-ladies - if you can not stand by-products, it is not necessary to cook hodgepodge with the kidneys and other Pluck.

If you like that in your bag of solid smoked meat on the role of part - your solyanka still correct.

You do not want to add capers? Do not add, it is still a big part of the defenders of the classic recipe with capers them had never seen. Want more tomato in it - and that's fine.

Someone cooks hodgepodge with cabbage, and someone - no. Someone adds a potato soup, and someone does not add. Someone makes it roasting, and some onions protushivaet with pickles and all. The very folksy origins halophytes allows any options.

The main secret of this halophytes - formation of its sharp, spicy and rich taste with the help of brine and vinegar. Because it, like it or not, the same "Rossol" or "rossolnoe dish", which is just mentioned in Domostroi (if my memory serves).

My recipe will result in resentment of fans of "classic" - it has a huge amount smoked sausages and meat pritushennye to start with onion and tomato cucumbers, brine, salt, spices and water - all. This scalding is obtained, nourishing very acid and hot soup, which is ideally cold fall, with a strong smell of smoked - salivating begin to flow even when the first inhalation

What do you cook a hodgepodge? 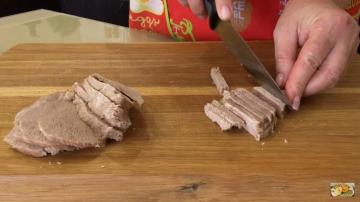 The most delicious meat salad with tender veal and stunning dressing

Offer to cook a delicious, hearty and unusual salad with tender boiled beef and vegetables. Swee... 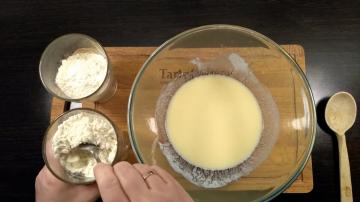 Pies on kefir. The recipe of my grandmother. 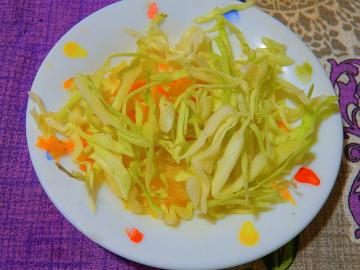 A simple salad, sweep the intestines

If the gases are tortured, it is time to cleanse the inside. There just have blockages, otherwise...