Food bachelor soup with lentils in Spanish. Preparing at least an hour!

Well, let's continue our culinary workshop for singles, and just for those who do not like a long time to stand at the stove? Today we turn to soups. I will not argue about the usefulness or uselessness of soups, scientists themselves have to unambiguous conclusions they came to this issue. We take for granted that there should be a soup - no wonder we repeated it since childhood.

The main thing that this soup composition did not look like "Doshirak". Consequently, no chemicals in it, we do not need.

But then what to do? Unfortunately, soups, which are cooked and tasty themselves so that Yum, I do not know. But there are recipes that really do not require a long fuss.

Today - one of them. Lentil soup with smoked sausage. Delicious, nourishing, not very expensive. And most importantly - is brewed without any problems.

The first thing we cut the sausage. Desirable - hunting sausages, because in the original version of the recipe used Spanish chorizo ​​sausages. However, given our realities, all I have is, you can even take the smoked chicken leg.

So, sausage or smoked meat cut, send in a pan fry in a couple of tablespoons of butter, olive or sunflower oil.

Cut a quarter of small onion rings, and a carrot - a ball joint (not fat). And all this - for the sausage. The next shinkuem celery - thin horseshoe.

Fry all this wealth is five minutes - seven that appeared a plaque on the bottom and the walls (it then all goes into the broth, reinforcing notes minds of most of the fifth taste). At the end of the pulp is added in zazharku pair of three tomato, salt, pepper, fill with hot water (a half liter).

Once the water has boiled, sleeps two hundred grams of washed green lentils. Take only the green, red seethe and turn into puree.

At the end of cooking, squeezing a couple of cloves of garlic, and voila - the tasty, hearty, and most importantly - useful soup we ready.

PS. Of herbs make good use of it oregano or cilantro. But all sorts of olive, etc. - do not place, they will spoil the taste. If you like soup witty, during the preparation zazharki can add jalapeños to pre-purging the seeds and pulp. 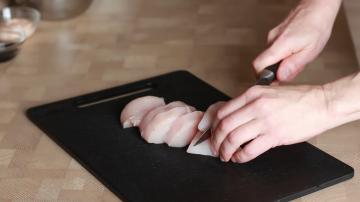 Friends, I want to provide for your consideration very a simple way of cooking chicken breast. So... 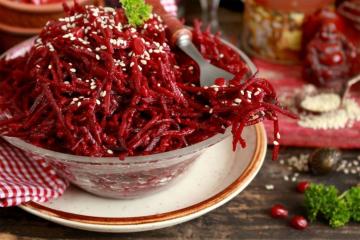 Beets and onions in Korean. Tasty and easy

Unreal tasty appetizer of beet and onion! Ostrenkoe, spicy, impossible to refuse! I cook for my h... 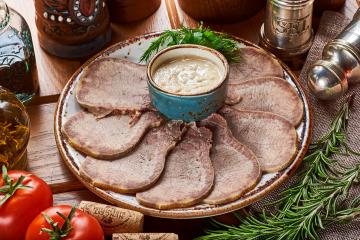 How to properly and delicious boiled beef tongue