Taste - amazing! Dishes, which can and should be used cucumber pickle

The fact that cucumber pickle helps a hangover - know, probably all. Recipe that passes from generation to generation: if yesterday you were well, oh, very well, and today has become well about-about-very bad, drink rassolchiku (you can not only cucumber). Man back to become, even to this hungover flowed puddle.

But pickle - it's good for other cooking purposes.

Think about the cookie recipe on cucumber pickle known to many, his recipe is simple: five tablespoons of vegetable oil is mixed with a glass strained brine, add a cup of sugar, and slowly pouring the mixture into flour (about 600 grams) which has Russians involved teaspoonful soda spoon.

That is to say, the classic genre, which has many variations with different additives.

The brine should put out the beef, well, if it is really bad in any other form. Comes the meat, which is to look at (in the store) just beautiful, and then it turns out that bought the meat, and the old soles.

So, in this case, the bulb passiruem to transparency in oil, and that at the time of this very transparency we add to it our beef, cut into small pieces. Small - well, at 2-3 cm, approximately. Fry for five minutes - can be a little longer, it is desirable that the beef grabbed a light crust.

Then pour into the pan pickle - grams two or three hundred, and a spoonful of honey (honey and who does not love, can not be added). Simmer for an hour and a half.

Optionally, you can right at the end of quenching add finely chopped pickled cucumber, but you can not add. But the sauce cook desirable.

With the sauce is simple: on the other pan fry a spoonful of flour until golden brown, fill it with a certain part of the juice, which is stewed meat, stir so that we avoid forming lumps.

Then add it to the pan with the meat, boil for five minutes. Done! Serve with mashed potatoes though, even with porridge - with anything.

Variations, by the way, a lot of sauce. Someone adds a bit of tomato, someone - a little cream or sour cream. On the taste, the color, as we know, all the markers are different.

And now, as they say - a bonus! Use can not only brine, but the marinade. Have you tried the pickled eggs? If not, then we lost a lot. And if you are too lazy to cook them, or rather, not them, and marinade for them, it can be much easier to do in cucumber marinade send some cooked hard-boiled (and peeled, of course), eggs and place in refrigerator for a couple of days.

Cool appetizer and hassle will be ready without worries. 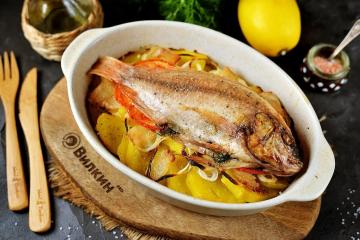 Tilapia with potatoes in the oven

Tilapia is a tasty, low-calorie and healthy sea fish, very popular all over the world. We sell it...

"Smart" cake. During the baking itself is divided into layers

Very interesting and unusual cake, which during the cooking time itself (!) Is stratified into th... 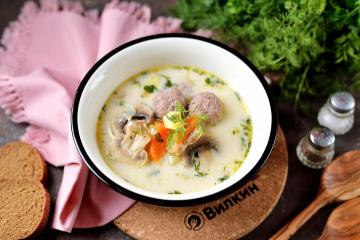 Cheese soups are very popular in many countries, and those with meatballs, or, as they are also c...