As I am preparing a delicious soup

Yes, I know that every cook they own. And that every cook - the most delicious soup. Generally, borscht recipes there are so many, and each one of them - the right one. Somewhere cook borscht with dumplings - and this soup. Somewhere cook it with beans - and this soup. Somewhere prepare it without beets (I know one family in which the beets can not tolerate all the polls), but the fact that there is the hostess cooks - also soup!

So pre-stop controversy, declaring - my most delicious soup. But yours too - the most delicious. Let us not quarrel over such trifles. Everyone likes a certain taste. At home, for example, love to soup was ostrokislym with a pronounced flavor. But not thick so it was nourishing. That it is not watery, but without a thick layer of fat on the surface.

Do you think this is easy to prepare? Yes schaz (I know how to spell the word "now", it is not necessary to correct me).

So, my non-secret secret:

1. You only need to cook on meat with bones. It is desirable that the bone was not alone. Broth, boiled meat only, not nourishing, it is an axiom. Before cooking the broth, meat and bone should be pripech a dry frying pan. Meat I prefer beef.

2. Broth cooking should be a long time! Along with the meat in the pan should throw a crude onion, cut into halves and these halves pripechennuyu dry a frying pan, and more - cleaned carrots as well pripechennuyu a skillet, a few pieces of celery root (and bake at pan). Salt soup is better at the beginning of cooking, so meat is better to give your juice.

3. Foam and fat from it is better to remove, and more - using special absorbent wipes for fat (their made in Japan, and I have somehow showed their collections in one of my "essential kitchen assistants ")

4. Beets need to extinguish not only with vinegar and lemon juice, but also with sugar. And not just to put out, but first - caramelize. That is, in a well-hot skillet throws a spoonful of sugar, when it melts - Put the beets. Actively interfere (all over a high heat, yes), and then pour the right amount of lemon juice and vinegar. Only so-svekolochka beet yields, firstly, a very interesting taste, and secondly - a strong bright color.

5. Initially, the broth is better to put the salt is less than necessary because dosalivat and straightening will taste at the end. And put spices better than at the beginning and near the end of cooking. Some say that they are, in that case, do not have time to "open up." All of them have time! But if you throw them in the beginning, when the broth cooked, they lose half the flavor (yes, there is for the spice).

By the way, before they are sent to the soup (almost at the end, after beet), warm the mixture on a dry pan (or oil droplets). The flavor will be magical!

PS, pripechennye onion, carrot and celery is necessary to remove from the broth after he cooked broth and before started to cook soup. 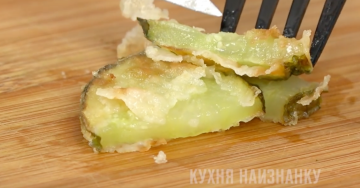 How we fried cucumbers

I'll tell you right away - this is not a recipe. These are my experiments)) But I liked this meth...

Soup with meatballs and vegetables 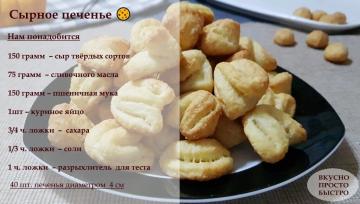 Delicious homemade cheese biscuits in a hurry! Cookies get air, and incredibly tasty win every lo...