I found the USSR "side" of my childhood and early youth in this country, a little later - I watched its collapse and the emergence of the new. Not to say that nostalgic for the lost state, I will not say that he admired the new state. These are the two "big differences", which compare quite correctly.

But there is something that makes me very fond memories... or vice versa, surprise. This is food. Recipes Soviet times seem, at times, absurd. But the result is... delicious.

I still remember the sandwiches, which played the role of snacks even on the festive table: black toasted bread, which flaunts kruglyash boiled eggs and sprat. Optional (in season) there could add cucumber and smear mayonnaise (as available).

Recently, on a trip to one of the station cafe I saw these sandwiches! I could not resist, took the... Hell, and yet tasty (if only sprats better, a hundred years have not eaten delicious sprat).

Even burgers, a riddle which I have not figured out yet. They were given in schools and summer camps for second. Here they were in kindergarten or not - I do not remember. In short, the main feature of these chops (and, indeed, a major determinant of their taste) was breaded.

Than the breading did - I do not understand. Find a cook who would have worked at that time in the kitchen, or at least routing "Ever chops" - is not possible.

We have a child called them simply "chop the straw." Breading looked as if it had actually made from milled straw. But damn it, it was delicious!

Soviet "Olivier"! Oh, it is a symbol of nostalgia for a past age and the very nazhoristoe (and familiar to everyone's taste) dish, which is in the feast, and in the world, and good people. Cooked sausage and carrots, peas and cucumbers (pickled or fresh), all - polished and potatoes filled with a mixture of sour cream and mayonnaise. Restaurateur Olivier would have had a stroke, bring it to him to try to mash. And we - anything used to.

By the way, the habit - the basis of food preferences. Do not taste, but a habit. When I see the good old "Olivier" Soviet times, but in the new version - shook on the basket (such as tartlets), see: our tastes in the coming years, commercials a hundred - will not change.

Another nostalgic Soviet invasion in the present life - a herring under a fur coat, portions of expansions in champagne glasses. But not high and wide. It was in a restaurant in the small town of Rostov the Great. Foreigners with interest the proposals under consideration dish, some even ventured to try. It was funny (but the salad I do not like).

But still - nuts. From ovensWaffle. Or rather, not the nuts and stuffing, which was made of condensed milk, butter of crushed walnuts. We vykolupyvali the stuffing spoons. And then glued nuts and threw back. Uh, then my parents swore!

You know, I have recently been told that the main secret of the taste of this cream has a long cooking condensed milk. Either 2.5 hours, or three - the mandatory minimum. So that's not true. I brewed a modern condensed milk (even a few species), a damn good does not go

That can only remember... And sorry.

Threat, And that you loved as a child? 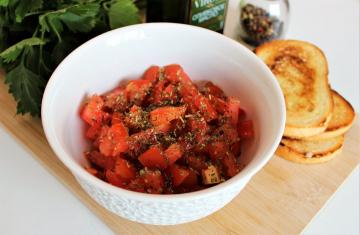 I cook according to your recipe. Bruschetta with tomato and cheese

Today I'll tell you how I cooked snack prescription my readers. Tatiana left for my article in hi... 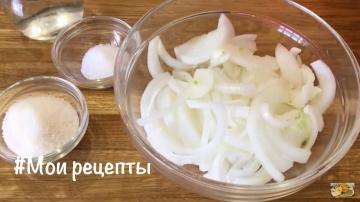 Salad every day for a few minutes

Hot dish for dinner. Cake in the pan.

I cook a delicious cake in the pan, simple in execution, but very tasty. Soft gentle airy batter,...