Butter: how do now and how to choose it?

My acquaintance with the process of production of the butter has happened in my childhood. I do not remember where it was picked up not too reliable information: the butter whipped sour cream.

In the depths of a household refrigerator hiding Bank of sour cream. Without thinking, molded part and tried to whip her... Actually, it was the first attempt to beat with something in general, I have not been dealt with even scrambled eggs. Because, first applied for beating a spoon, then - the plug, the next - whisk.

But... it did not work. After washing the plate, I hide all traces of activity on the production and decided to forget the butter. Until such time as a kind of "real butter bought... a rare muck.

Here then we have to start studying the issue.

So what have learned?

There are two ways to obtain an oil.

First - a classic, when it is whipped cream with fat content of up to thirty percent. In the process of the cream at separated oil itself (solid fraction) and buttermilk (liquid).

Second method was developed Maleshin called by converting high fat cream. Milk is separated, are the cream of a fat content of 30 to 40%, has already separated them, getting even more heavy cream, which are similar to the composition of the oil, but are in a liquid state. In order to make this cream oil, they quickly cooled while stirring.

The oil may be sweet and sour cream (difference - and added to ferment for podkisaniya cream), and have a different fat content: from 72 to 5 "Country" to 82, 5 in the "traditional". Seredinka - oil "amateur" with a fat content of 80 per cent.

Now the fun part: GOST regulates the production of only these three varieties, and all. So if you trust the guests - you need to look for them.

Qualitative sorts of butter can be attributed "Vologda", it GOST not have TU. TU is not because a suspicious sort, or it can produce all a coma not laziness. Just Vologda butter - a name of origin, it allows enterprises to release after the check (in throughout the year with) and TU contains a control condition (ie, not all oil can be released "Vologda").

So how to distinguish quality oil from a fake?

Do not look at the price, the price on the spread can be placed beyond the clouds.

Look at the color. Summer natural creamy little yellow - because of the large quantities of green fodder and cow ration), and in winter - lighter. Natural oil should not be too bright and it should be a uniform color.

Look at the shape: natural oil it holds better spreads. If melted butter spreads sadly, holding only by the wrapper, and the air temperature around - lower than in the bath, it is necessary to guard.

Sniff: natural oil has a light creamy smell. Than it is brighter - the greater the likelihood of the use of flavorings.

Take a look at the cut. If the oil is done by converting the cream, the more often a product has on the cut surface is shiny. If the oil is made by striking, the surface may be matted. Permissible water drops on the cut, but now crumbling quality oil - should not. There are two options - a violation of manufacturing technology and formulation. 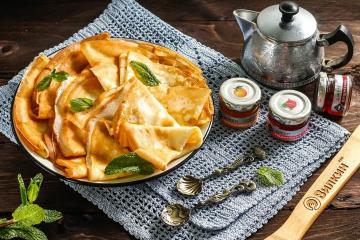 Custard pancakes with kefir and milk

Ruddy and thin pancakes are loved by everyone for breakfast, dessert and afternoon tea. It is imp... 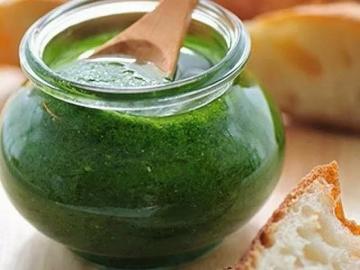 I mixed the garlic, oil and herbs and get a flavorful condiment for the winter. My recipe

A simple recipe for how to keep fresh herbs for a long time. And not just maintain, and cook from... 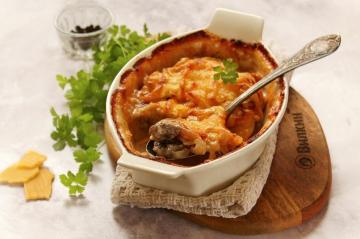 In my subjective opinion, French beef meat is much tastier and more aromatic than pork, chicken o...