Cod from a cider sauce: Russian-style cheap, in Normandy exquisitely

The one who first came up with to make cider from apples - should erect a monument. They say it has made King. And very regal: I sat on the bag of overripe apples and crushed them. The resulting product ferment that enthusiastically embraced subjects.

In fact, it is certainly a legend. Intoxicating drink made from apples still Pliny mentions.

Cider - a real cider, of course, not cheap fresh-water sponge, which is sold in huge plastic baklahah - the drink of the gods. It is lightweight, perfectly quenches thirst, tasty and even, paradoxically - useful.

And cider can be used for the preparation of many dishes. Norman cuisine offers even pork braised in cider. It is divine, I can tell you (although I do not like pork, I do not like this meat!).

Now we have on the shelves there is not a weak selection of intoxicating drink apple. There is one that resembles the price expensive champagne, and there are quite affordable. Not necessarily, by the way, to strive for import. We now have the domestic brands, but it is high quality. The main thing is that in the formulation used just the right apples and no wrong additives (colorants, flavors, all in the furnace).

If such a cider bought, let's cook. Today - cod.

So, except for cod, we need:

Cod baked in foil. This is done simply, to lay out foil butter on it - the fish on top of the fish will season with butter again and seasoned with olive. Of course, add salt, pepper, a little parsley and bay leaf. Only then we wrap it in an envelope and put it in the oven for 20-25 minutes at 180 degrees.

While baked fish sauce is made.

Take the pan, it will throw a piece of butter and fry it on a stalk of leeks. You forgive, but I will clarify: use only the white and light green part of leeks rough feathers food do not go. I understand that many are likely to know it without me, but how many people write - muck your leeks, neugryzimaya, he told me his whole stiff feathers salad spoiled - do not count.

When the leeks will be quite soft, add to 200 ml of cider and begin to evaporate.

When the sauce thickens, it is the turn sour. And add it, stirring constantly, bring to the boil, then immediately remove the sauce plate.

That's all! Based on a set of products, it is, by the way, Norman dish (butter, sour cream, cod harvested which have traditionally engaged in the Norman sailors). So there you have on the table - a piece of France. Bon Appetit!

Prepare a very simple, quick and amazingly tasty main dish. Something between a chebureks and stu... 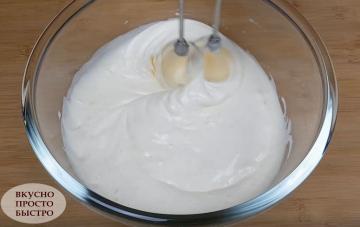 I called it this because inside the cake, there is a delicious soft chocolate layer, which is not... 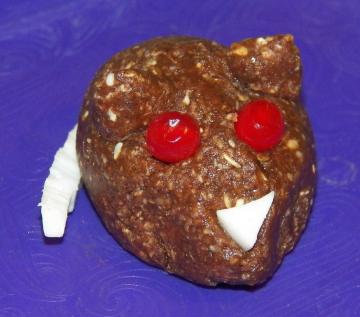 Useful to make symbolic candy for kids, in which not a single gram of sugar, margarine, antibioti...