How to choose high-quality and delicious chicken

Chicken - Bird tricky. Pretends to be fair, pink, delicious-looking, buy - this ha-ah-adost! How many times was, will put in the oven to bake a delicious and very decent carcass, you open half an hour later - in the form of inexplicable splashing liquid, chicken itself shrunk by half, and the smell is - you know, there IS exactly no one will be.

I know that happened. Because the chicken is now one of the most affordable, and therefore bought meat. And manufacturers sometimes... it does not lose the conscience of even partially, but completely.

So what to do then? Do not trust and verify. Organoleptic.

Chicken is not a fashion model and socialite. because it carcass must be proportionate.

If you offer a chicken body with disproportionate limbs (or, especially breast) - lookout. Zdorovuschie legs, too magnificent breasts with crumbling wings - a sure sign that the bird life stuffed hormones.

I suspect that hormones are now getting all grown up on meat producing animal. Accelerate weight set - who would refuse from manufacturers? So it will not be able to avoid them in the diet, and that they are harmful or not - it is better not to think.

Just if you can not take a village chicken grown on old technology - in the grain, Worms and grass, it is better to select more or less to form a collapsible (can, less of these hormones ate).

They are still in fact and taste changes. We noticed that boiled chicken is now more often - tasteless, sprawling muck? Here's something. And the meat next to the bone she gets nasty, even in fresh birds can get very strange and unpleasant taste. Some do not notice it, but many times noticed by the children (whose taste buds are still're spoiled). Leg gnawed chicken from the village so that the bare bone remains. From the shops overgrown - bite, the question is why is not eaten - frown, they say, there have bone meat "is not so."

The young chicken skin is tender, light and oil - pale yellow. If the colors are somewhat different - it is better not to take. Broilers to old age do not survive, and discoloration rather suggests that ill he.

If everything looks good, then more chicken sniffing. Kohl smells of bleach - do not take. Chlorination of meat such as the widespread and still a legitimate practice, but in addition there is irresponsible sellers who to sell moldy stuff, first washed the carcass "to smell", and then kept in a weak solution bleach.

About elasticity silent - if pressed with your finger, and left a pit - is not necessary to take.

And ne must take a wet hen. Well, yes, yes, the skin of the carcass should be as dry. If it is wet (wet strong, not just reasonable for slaughtered poultry vlazhnovatoy) then rather two options: either thawed bird, or to increase the weight (or repulsed smell) Used in water. And even then we do not need.

There is one more feature - "Slipperiness" and stickiness. If the skin is a little bit, so slimy, it means that the bird was sick, and fed her with antibiotics (And that's not counting the fact that it may well have started to spoil, but... was washed with potassium permanganate, for example, a couple of times faced with this type of fraud).

Oh yeah - the latest sign: if the chicken is packed in a bag of fluid in it should not be. Here should not and that's it! 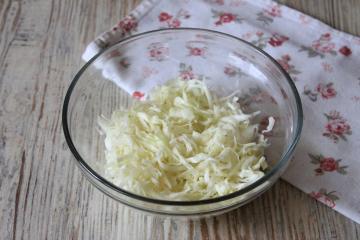 Hello, my name is Oksana, and this is my cooking channel! And, on my channel I publish recipes th... 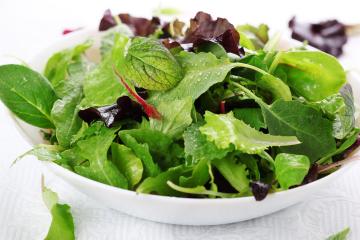 There is more than one hundred kinds of salads: leafy and headed out of different shapes and colo... 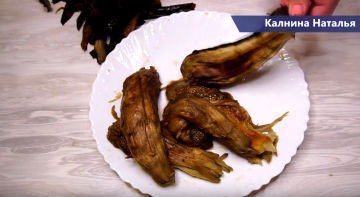 Baba ghanoush. And as an appetizer and as a sauce, and just on hlebushek!

Very tasty with pita bread or cake, it can be used for sandwiches. Ready to forgive and even fas...