Cucumber - Vegetables INR-ho-function-chi-o-onal! About how. They are salted and pickled, and more - are beaten and even fried. Tried fried cucumber? Taste, as used to say Raikin - spetsifitsesky! I know how to spell the word "peculiar, do not correct me. This I have tried to replicate his pronunciation... Maybe not too successfully.

But back to our cucumbers. Fried.

Fried cucumber - a mandatory ingredient in many dishes.

Do you want to create first, just like in China? Then take a cucumber and write a prescription!

Point one. Cucumber soup one will be bored. Because apart from him to splurge on noodles, rice can, as you can - the egg. Of course, let's not forget mushrooms, oyster mushrooms or mushrooms, but if you suddenly have any others, and they in turn went out, the Chinese cuisine - is such wali all, and there zapoliruem spices! Well, the beauty add ginger slice, onion head, Palu cloves of garlic, a few stalks of green onions... Of spice take soy sauce and black pepper.

Ruthlessly crumble onions into small pieces and begin to torture him with hot oil. For thrills in the same skillet send ginger, chopped green onions and even garlic.

When the onion has not fried, but has become slightly transparent, add the mushrooms and when the kitchen crawl mushroom flavor (cooking allows it to squeeze the last drop), send all zazharku into the pot, the Gulf boiling water.

And now comes a moment X. Cut into thin strips our cucumber, roast it and... At this point, the water in the pot of soup is to reach the desired point seething, but because it comes time to add the noodles, boil a little bit and... voila.

The third point - in the almost finished soup add our fried cucumber and soy sauce.

Voila: Chinese mushroom soup is ready. You can invite guests (most importantly, do not forget that instead of a spoon guest rely sticks!)

Today we are preparing a delicious curd cake with raisins. It is high in calories and sweet. But ... 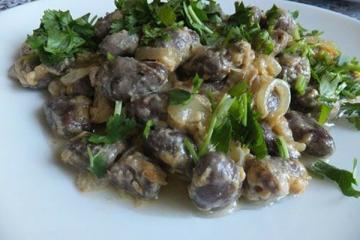 Chicken hearts in a creamy cheese sauce. Tasty and easy

Today for lunch I cook chicken hearts in the sauce. This is a very simple recipe, but it is unrea... 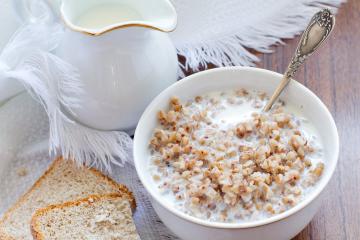 Easy and affordable way to relieve pain and inflammation in the pancreas. Recipe approved physici...