To prepare for the winter useful compote of Feijoa. Recipe without sterilizing jars

Bright and unusual compote of a feijoa, which are easy to prepare at home. A simple way to keep useful vitamins for the winter.

Feijoa - a berry that contains a large amount of useful minerals. Feijoa first discovered in Brazil in the XIX century. Over time, it began to grow around the world.

Ripening season is in the fall - the end of September, mid-October.

I first became acquainted with feijoa 10 years ago. I walked through the market and came to the mountain of green berries. Previously, I have never seen feijoa and did not know how it is. The seller told me that the best way to cook from Feijoa fruit compote and raw jam.

By the way, the recipe of jam I will publish soon, so subscribe to the channel, so as not to miss.

In its raw form the taste of Feijoa I did not like, because it is too tart. But when I first cooked compote of it, I realized that now I will do it every fall. Compote turns incredibly delicious and fragrant, and slightly sour taste thirst quencher.

The fruits of feijoa rinse it under running water. Spoiled fruits throw or cut if not all of the fruit is spoiled.

Cut off the ass, and large fruit cut in half. You can also use the whole berry compote but will take longer to infuse.

Pour boiling water in a thin stream to the bank time to warm up and do not burst from the temperature difference.

The water is drained into a pan and add the sugar. I am sending to the plate and I bring the syrup to boil. After boiling syrup transfused into the jar and then roll up cover.

Immediately after seaming flip jar and put away in a cold oven until cool. Usually it takes at least 12-14 hours. If you cook a lot at once compote, it will take longer to cool down.

After cooling tidy insist in a dark place for 2-3 days. Compote ready. Compote keep in the closet, it's dark and cool.

Ingredients for a 3-liter jar

Chicken stew in its own juice

Chicken stew in their own juice. Very tender, juicy, extremely soft, just melts in your mouth. It...

Lipstick to 200 rubles from Lux Visage, the quality of which claim to be luxury

Lipstick - that's my weakness, I can not go past this cosmetics in stores, be sure that any test ... 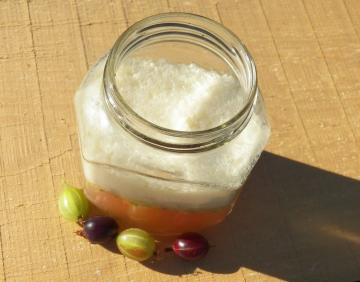