The affected fish worms. How does it differ when buying and how to avoid becoming a worm for the new "home"

Fish - delicious thing. But along with the fish not to eat any more nasty? I know people often visiting the northern regions. Many of them complained about a hundred in Obi left without fish parasites - cheese, for example, almost all opistorhoznoj, and yet tasty to eat it fresh, barely salted!

Opisthorchiasis found in whitefish noble, and very very plebeian shuragaykah (and they are there for a certain period of the catch is not considered), and many (almost all) kinds of freshwater fish.

IMPORTANT: if the fish struck opisthorchiasis or some other parasite, to identify just the infected fish in the eye when you buy - it is not possible. There are not too working method of determining the long-suffering from parasites fishes - she is skinny, and if you live - then Kweli.

Also advised to look at the abdomen - if it is inflated, it does not take too it is likely that there - parasites.

I found a list of rivers which are believed to be the largest number of infected fish.

• Dnieper and the Northern Dvina.

By the way, in the north of the locals fish for themselves in Obi did not catch - if not all, the many. Prefer to go on a fishing trip to a small river with clean water - they say, is safer.

The saddest thing - opistorhoznoj worms are not the only parasites that are making their way into the fish. And suffer from parasites not only freshwater fish, but also the sea. You think, why sell gutted pollock, almost always? Right, because it very much... infected. So do not buy it unskinned (often this happens, especially in the markets.

It has long been walking a sample list of fish that are most common parasites. But this list is far from complete. In it, for example, there pollock (it was mentioned just above).

In fact, the jelly is not all breeds, because from time to time there are reports that the parasites met in sterlet - noble of the noblest, which was considered them inaccessible, and someone says about infected red fish - salmon and trout.

Why is this happening and who is to blame - is unclear. Maybe people have dirtied the river. In the north, we told that in the late nineties, there was a period when the fish factory in Salekhard do not take plashkotov extracted with whitefish and fish thrown back into the water. Like, next year's downright sharp peak infestations in fish went. Before the cheeses if not steamed... There dependence or not - I personally do not define.

It may, of course, the parasites in the fish - normal is its natural state.

And what do we, the fish are not there?

Well, if I have an appetite for fish is not repulsed thorough, there are two easy ways:

1. The fish is good to freeze, not a day or two, and two weeks. Just fire.

2. The fish is always carefully prepared and never use it for cutting the same board on which cut the other products.

Simple rules, by the way, and if they are to perform, then... bon appetit! New "home" for worms you will not! 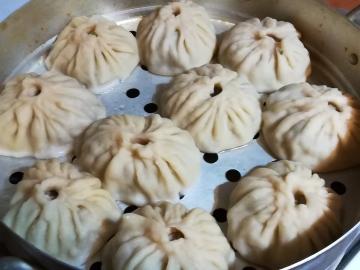 Today cook Buryat posture, or even in another they are called buuzy, as if to say easier, it's ju... 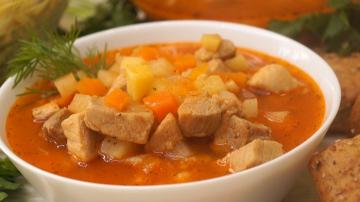 Laghman. It turns out this yummy, which is simply impossible to stop. Noodles, lots of meat and v... 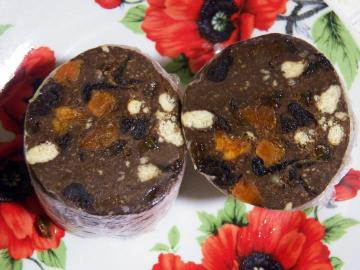 Useful as a chocolate sausage from a children's fairy tale! simply delicious

These chocolate sausage is very hearty and perfectly brighten tea. They made quite simple and eas...