Learn the secrets amazingly juicy dumplings farm, sharing with you

That's what I do not like dumplings, it's "rubber" meat, case after cooking and watery taste of the juice, formed the "inside" of the product. The network runs a lot of life hacking, learning how to avoid this moment. Someone recommends cut in minced onion over (as one smaller), some stuffing dilutes with water, but someone - milk or cream. Some add the butter.

As for me, all these ways to overhaul spoil the taste of the finished dumplings. Onion makes it sharp, oil - too fat meal itself, and milk or cream in stuffing for pelmeshek so do not place.

But this happened to try dumplings made in Dubna, a small production of Eugene Mitrofanov and Anatoliy Chernov. Frankly, to the purchase dumplings I'm biased (affects stormy past student), but even when cooking was surprised - smell great! So, as they should smell like real homemade ravioli. Delicate aroma of meat with a slight admixture of spices - and nothing else!

Together with dumplings grabbed ribs marinated in barbecue by Vladimir Kopylov too great, I recommend, and many other delicious.

That's still worth mentioning halloumi cheese and curd cream, which the store will not find, taste - a wonderful, soft and balanced).

Order my left is not small.

But back to the dumplings - with them began!

Nothing special did not expect, but after the first "Zakus" realized - stuffing just what we need! The meat is not tainted excessive amount of onion, not watery, and the soft and juicy. Rich, full taste and aroma is also remarkable.

I began to dig out the secret. Well, the site has a complete description of products - everything that used during cooking. It turned out - to add minced very concentrated broth. Tried to do the same at home - work!

So now, if you want juicy pelmeshek - cook soup. Well, for those who do not have time to sculpt - rent password and turnout: website "Eat rustic"And for more amenities purchases - the promotional code promotional code IPOVAR, which will give a discount of 500 rubles for the first order. 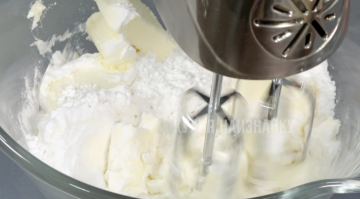 Shortbread cookies "Sugar", "Flour", "Snow White", "Snowball": there are many names, one recipe

I don’t like this phrase, but here it fits: "Cookies that melt in your mouth!" I'm sure everyone ...

Recently, I began to buy sweet vanilla cheeses more often: I show that I cook from them (a simple recipe for a delicious dessert)

It turns out a lot! And very tasty!I recently shared a recipe for curds with oranges. Many of the...

Simple and very tasty dishes that I still often cook today.About 23 kopecks is not a joke. It was...