Soviet cooking, which can only remember with longing

Yesterday, glancing down at the counters with salads and semi-finished products in the near hypermarket, I habitually passed. Because the semi-finished now - it's, you know, does not help working housewives as it was before. Semi-finished now - a way to dispose of products, shelf life which is coming to an end, and more - to earn good money on the most banal.

Yes, there are exceptions. I was in the production of semi-finished products of a large network - there is security - both in the laboratory with terrible virus works and control at every stage. N how many can boast of that? The farm shop next door to buy something - would not venture ever.

Pricing for semis now - with wildly-! If we take into account all sorts of cakes, dumplings, nuggets... Ooh, it seems to make them utilize it, the normal host of the pigs will not give up - afraid to poison. This I judge by the smell, yes. Because most products have some nasty smell, even if they were like fresh. Whether the smell of old fat, or even a dirty trick - I find it difficult to identify him, I have no idea what normal product may well smell.

I know, I know, are now coming amateurs boast and say that this problem is solved. Like, you have to buy expensive semi-finished products. Like, if you do not want to eat shit - you have to pay, and expensive.

But excuse me, excuse me, why not so long ago (though in another country has), let the products and shared on the class, but still remained... products, and the price was within reason. In the same cooking and salads sold semi-finished products, which is not very refined recipe. But the salad was worth a penny, as well as burgers. And the burgers - you can have from them is a huge amount of drips is unclear what stinking fat.

I remember my childhood cooking - it smelled delicious, and there were always buyers, with different types and ages - from students to retirees. If cooking in this case was at a restaurant or cafe - yes there were queues! And people can (realistically can) afford to buy there almost ready meals and cooking.

Looked, how much it is a banal fried fish. Capelin. I watched capelin, because I saw it on the counter in hyperspace, near the salads and other things. At the price tag paid no attention, I thought - capelin can not be somehow inadequate, it's capelin! If earlier attention, as I did, at the price tags do not pay, you sit down. 395 rubles. Per kilo of fried capelin.

The wholesale price of capelin here. Almost eight - ten times the price of a roast has become higher, yes?

And that's just the fish. About meat products, I am silent. Burgers before, cost like 10 cents apiece in cooking. Both were delicious. Now even those burgers that beautifully arranged on the glass cases is practically impossible.

The most luxurious in any cooking was cake department. As many deny it, but it's true. Yes, these types of cakes was not so much. Choux, brilliant white glaze or chocolate. Sponge area. Eclair. Jelly - diamond coated with a layer of quivering jelly. Sand cakes decorated with fungi or curls. Sand strips. Sand ring nuts sprinkled. Baba. Cupcakes. Weighted pies with cream - still remember the cake, which was called "Karpaty", sponge cake with a layer of cream with cocoa, sprinkled with cocoa powder mixed with sugar. His cut huge chunks and weighing, wrapped in a thick gray paper. She oiled for a while, until the cake bear home. And what it was delicious!

And the taste - it's not because the child receptors sensitive to tastes. I have just the opposite - it seems that I have become more sensitive to the tastes of the day by day, because in most of the modern cooking Confectioner feel banal... margarine.

Yes, I know I have to go for the pastries in the "Pushkin", and then who will sell something to eat at a price less than three zeros per kg of product... Only for some reason before it was possible to have the same pleasure to eat the cake and from a nearby cooking and cooking of at -konditerskoy "Prague". At the same time, those that were sold in the "Prague", the price is not frightened at the mere approximation.

And all this we can only sadly remember. 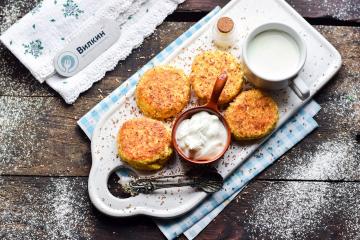 Today I propose you to cook diet cheese pancakes without flour. We will use low-fat cottage chees... 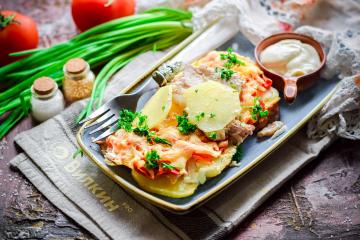 French meat with potatoes in the oven

Many people know and love today's version of the dish that I want to offer to cook - this is Fren... 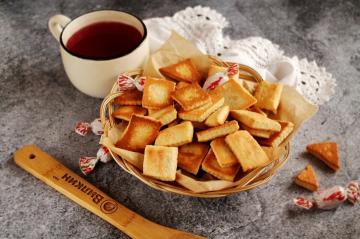 In the composition of cookies, whip up the most basic products. The dough without eggs, thanks to...