Three of the most common errors in the sauerkraut

Treated the other day, a jar of sauerkraut, but modestly said:

But why it did not succeed - it is not clear.

I'll confess I did not really like to entertain friends with his works. That is when the guests arrive - Welcome! And workpieces, conservation, and others - do not. Because each family has their own, long-established taste preferences. Somewhere like more salt, and in some cases - more acid.

Someone triple pickled vegetables, soft (I now do not understand the word at all!), And someone just crispy need (and I, and all my family just one of those). I do not like a huge amount of vinegar in marinades. Vinegar should be in moderation. I do not understand much sugar in taste when it almost soloist scoring rest. Spices without measure also discourage the appetite at all, especially if it is very fragrant spices - like cloves. Its something and mulled wine should be added sparingly, and only in the preservation - even more so.

And someone the more cloves - the better. And a lot of clove for him - just in moderation.

With the cabbage in our home, as we wrote and did the conversation short: it must be crisp, moderately tart, slightly tangy and light, white with a slight tinge of carrot. Appearance is also important because the appearance - one of the components of a delicious dish.

Consider the most common mistakes that sauerkraut is converted into something inedible rag?

Once saw a bucket of cabbage stood next to the battery - say, so it would be better to wander.

In any case this can not be allowed. It just seems that if the lactic acid bacteria - warm, they will work better. Work that they can be better. In the sense that it will be active. That's just such a cabbage is not wanted.

The optimum fermentation temperature - room, at least twenty, but not more than twenty-five degrees.

If you understand it above, then... is not enough that the cabbage is tender, it will begin to smell too nice.

Dishes, in which the fermented cabbage

I know the barrels of tubs in most of us and is not expected (I looked here and how much it costs a little kadushechka hair stood on end, although I do not very impressionable ...). But to solve the problem is simple - to use the enamel bucket without chipping or cracking.

But stainless steel and other metal beauty should not be used. I'm not a chemist, I can not describe the processes, but cabbage in an iron container turns soft rag.

Fangled salt - it is interesting, who argues, can be used for normal pink Himalayan cooking, for example, or black, or fine for podsalivaniya... But for the leaven needed most simple rock salt coarse. Stone, not even white.

Iodized salt also spoils the cabbage (and not only kale but also in general, all blank)

I know there are those who now I write that everybody knew it without me, but the strangest thing, besides them there are many people who sometimes all three at once make mistakes. 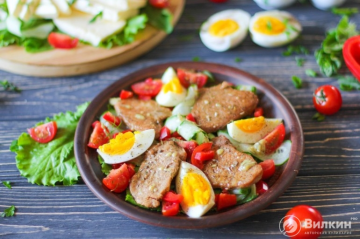 Sometimes you want to cook something tasty, satisfying and at the same time simple and easy to pr... 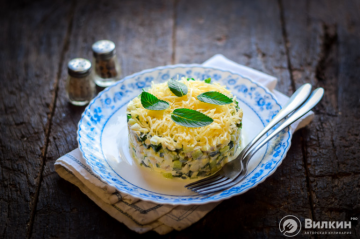 Chicken and fresh cucumber salad is one of the easiest to prepare in a matter of minutes for a ta... 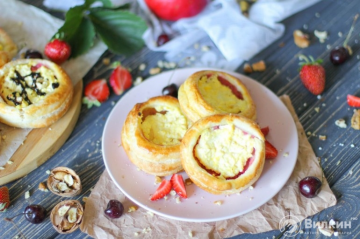 Delicious puff pastry cheesecakes with cottage cheese are ideal as a dessert for tea drinking.The...