Two unusual but delicious and hearty casseroles. Ideal for the cold season

Came the cold! What does it mean? This means tight, as they say, nazhoristye, dishes for a long time took place on the table - until the spring. Because it is better to warm up in the cold than a serving of something fragrant, it is desirable - with meat, or, at worst, a chicken, a fish?

The only problem is that cooking is hearty but most often fragrant long, it's not you chop salad.

And then comes to help it - oven! I put everything in a large kettle, a big pot or pots portioned, put in there, and... an hour later the fragrance throughout the apartment are floating such that Yum.

And there it is possible to prepare not only potatoes.

Let's start with almost pilaf? I confess that the first time I was offered to try a dish that I took the idea very skeptical. Because well for pilaf, if all the blame is not clear how, right?

In large kettle, a big pot or pots portioned laid layers: onions, carrots, meat, rice, tomatoes, you can - pepper, if any. Salt, pepper, spices can add to pilaf. If you use lean meat - add a little vegetable oil. If the fat - the oil or do not add either a little bit. All of this pour boiling water so that it is up to the finger covered all the ingredients.

We send in a preheated 180-200 degree oven for an hour, maximum - six. Of course, onions, carrots, peppers and tomatoes should be cut. It turns out very flavorful, tender, and most importantly - almost a dietary dish.

Do not want the rice, let's prepare in the oven... pasta. With chicken, but in onion sauce.

The main thing - a lot of onions cut. Because we need the gravy - what else will cook pasta?

Because three or four pot (well, one large) take 500-600 grams of onion and cut. It is possible - the fourth ring. Then chop the chicken into portions and put in a bowl: at the bottom - a layer of onions, fat, then - chicken, salted and peppered, then - again a thick layer of the onion.

We lay our pots cover and send in a preheated 180 degree oven for an hour and a half. Since I have the volume of your pots do not know, you are really monitor - because it's time to fill the pasta will come when the onion with chicken Extinguishes, giving a large amount of juice. That is something this juice and pasta fall asleep. Better to take a small pasta, because the big ram in the pot problematic.

Asleep? We leave in the oven for another minute 10-15-20, until such time as the pasta will reach readiness. Serve on the table! 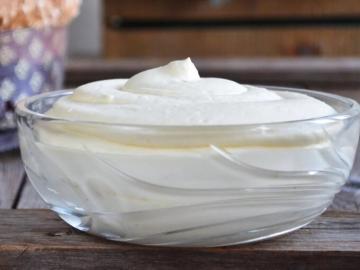 I channel a lot of recipes of different creams for cakes and other desserts, and they will really... 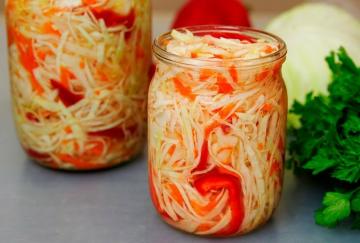 Variations in the recipes are many, but this is the cabbage has the most soft and delicate taste.... 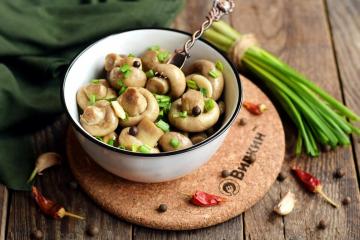 Instant pickled champignons are an excellent appetizer for a festive table. In any store or on su...