I never thought that the gravy, which was given to the Soviet Union in catering meatballs, hedgehogs, vegetables, or even to garnish such as pasta or mashed potatoes, many will recall with such warmth and look for her a prescription for open spaces Internet.

But the fact remains. Every now and then glimpses of nostalgic memories, beginning with the words:

I remember. But, the truth, I do not belong to the hot fans of this sauce. As for me, it has a few flat taste due to the fact that the spices in it is not used. However, it is this "plane" taste makes it absolutely universal, but still acceptable for food, even small children and the elderly.

Now this gravy relevance, as for me, does not lose (if the play with spices and herbs, of course).

So write down the recipe!

Sour sauces with tomato and onion were prepared based on the base 863 № sour cream sauce. Based on this framework, by the way, did a lot of Wow, what we used to call the gravy. Yes, and in its pure form in the home cooking he is pretty good (nothing harmful, as has already been written - even young children, although the elderly).

Prepare him a piece of cake - two hundred grams of sour cream take 10 grams of butter and 10 grams of flour. Flour slightly Passer unlubricated, cooled, mixed with oil at room temperature, put in a cream, brought to reflux, stirred, seasoned with salt and pepper. Pulping process was continued for about 3-5 minutes, boiled and then filtered through a sieve again and brought to a boil.

There are other variations of the base cream sauce, but they are called "white sauce with sour cream." They could also be the basis of gravy, but at least - too much trouble, it's just, well, two - this sauce increased the selling price of meals (and required large consumption products).

The white sauce was prepared as follows: in the melted fat is showered sifted flour and browned until it acquires soft cream color (continuous stirring). The browned flour, cooled to 60-70 ° C, poured into about a quarter of the required volume of broth and kneaded, gradually adding the liquid residues. Thereafter, the sauce sent parsley, celery, onion roots and cooked about 25-30 min. At the end of cooking to straighten out the taste with salt, black pepper peas and bay leaf. After cooking the sauce is filtered, triturated roots and is again brought to the boil.

For the preparation of sour cream sauce, white sauce with addition of white in the hot sauce (100 gram) is placed boiled cream (100 grams), salt, boiled for 3-5 minutes, filtered and brought to the boil.

Phew, it seems with the foundation of everything. Now, from the basics of make gravy. 200 grams of sour cream sauce we will need 75 grams of onion, 7-8 grams of butter, 25 grams of tomato puree.

Passeruem chopped onions, add tomato puree and passeruem another 5-7 minutes, then connect to the database and give simmer. Voila, Sovestky sauce is ready. 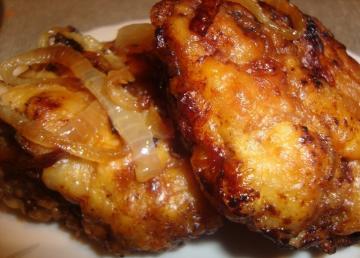 Chops liver in batter. Gentle and soft. My favorite recipe

I cook the chops already 5 years, and each time I am surprised how much it's delicious! Highly re... 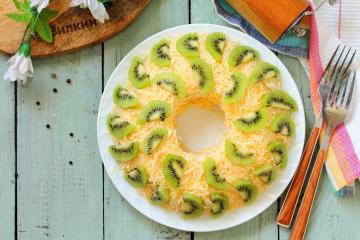 For the festive table, we prepare various puff salads with mayonnaise. Today I propose to diversi... 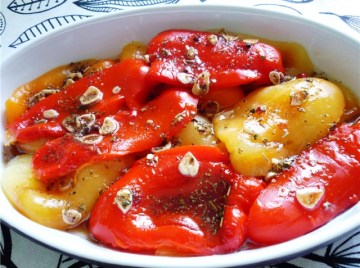 Pepper marinated for a day. My favorite recipe

Recipe for a delicious snack from the peppers. Marina all day, and it turns out very tasty, it is...