Five of my "secrets" of delicious cabbage soup with fresh cabbage

Soup - a dish universal. Large pot of this soup can provide for his family, and lunch and dinner for a few days in a row. Of course, the question is - will the home there are several consecutive days only soup - remains an open question, because my, for example, by the end of the second day tragically vzvoyut:

- What are you, the breadwinner, doing, you want to be on this cabbage zamee-e-Ekali as goat?

Another good thing that the soup - a soup made on the principle of "all that is most near the stove, all swords pot." I know there are many followers of authentic Russian cuisine, who shout that at present do not add the tomato soup, for example, or a certain number of seasonings, potatoes also advised not to put, and fill the rye flour for density ...

But is open to all of them a terrible secret - is now the very "authentic peasant soup," they have not, put them on the table pot, even out of the oven (you can still go there and throw a piece of coal).

In short, comrades, the food is evolving along with all of humanity. And each of us there are the secrets of his "most delicious cabbage soup."

I have already said that my family loves nourishing soups, with a pronounced taste (spicy-spicy-sour). Autumn - time of cabbage soup with fresh cabbage, so that it taste quite difficult to achieve, but it is possible. Still it is necessary to make sure that the cabbage turned into a boiled rag.

So - here is my small collection of "tricks".

1. It is necessary to cook rich broth, and from a piece of meat and bone. Water for this stock solim originally, and still - throws to cut in half the crude pripechenuyu onion, carrot pripechennuyu, pripechennye pieces of celery root. However, the cooking broth described in the publication about the borscht - so you can look there. Bake is better, even meat and bones. This is done on a hot dry frying pan well.

2. Cabbage should be used truly succulent. Do not attempt to dispose of povyadshuyu - that you will only spoil the soup. Povyadshaya cabbage turns into a rag, spoils the taste and appearance.

Tomatoes - in its own juice or fresh - best protomai few minutes with zazharki of carrots and onions. Yes, the ancestors did not do so, it is "not on the classics." So you're not in the black hut.

4. Fresh cabbage better before cooking slightly crumple hands. Little! It is not necessary to demonstrate force. And when the hurting - send it to the pot, not earlier than ten minutes before the end of cooking.

5. Yes, cabbage is cooked in ten minutes. Well, then the soup immediately after cooking is not served! Preheat oven to sixty degrees, cover the pan with foil, cover with foil cover and return the soup to "be well stewed." It can be an hour. It is quite enough.

And that's when the soup to be served. 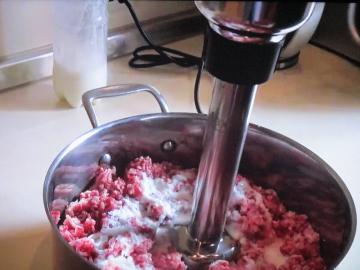 How to cook a tasty doctoral sausage (cooking technology base)

Many people think that making cooked sausages easily, but they are wrong. In preparation doctora... 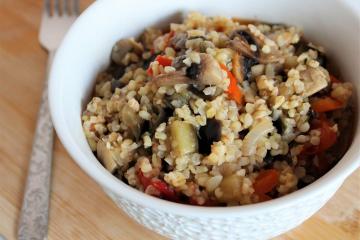 Bulgur with mushrooms and vegetables

I've never cooked the rump, and always coming to the store, I ignored it, I do not know why. But ... 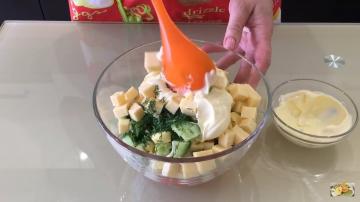 Salad with crab sticks in a basket

I offer to cook a delicious salad in pita with crab sticks. This salad with the original submissi...