Two dishes of potatoes, if all other kinds, she already tired

They say that bread around the head. I suspect, in the current realities rather, that the potatoes around the head, in fact on par with pasta was the main dish. Even if it is grown not alone, potato is one of the most affordable products, taking into account the revenues.

Especially sad when Monday - fried potatoes, Tuesday - boiled potatoes, on weekends - mashed potatoes. And so from month to month.

But once all the heroine of the famous film "Girls" would say of potatoes can make a lot of tasty. French fries and potato pie will not remember, go through the different recipes.

So, potatoes called "Romanoff" (do not ask why it is so). In general, it is rather a casserole of potatoes, but tasty. Reminiscent of the soup from an ax - if the potatoes to add sour cream, cheese and more - comes out very nice and udobosedaemoe dish.

• 1 kg of purified potato and grated

Prepare a piece of cake - putting aside about a quarter of the cheese, all the ingredients are mixed, spread in a form, sprinkle cheese on top... and into the oven.

If the form is large, it is all to bake for about an hour, and then the cheese (if you do not like much zazharisty) better to pour pudding at the end.

Another dish - potato "Dauphin". Why Dauphiné on - poor man? Well, because as a "Dauphinois" (so called classic version) requires, in addition to potatoes and a small amount of cheese still eggs, cream, nutmeg. And slaysiruetsya potatoes for baking thin petals. The same "Romanoff", only in profile.

And all the poor man on the one-two-three. First, you must choose not too large tubers and gently cleaned. Then he cut off a collum to potatoes "was", and its incised as fries, but not completely. In short, it should get the type of bud.

In the midway of the bud laying butter, salt, set in a baking dish, sprinkle cheese or put its thin slices.

Bake a potato should be about 30-35 minutes (so choose a smaller tubers). 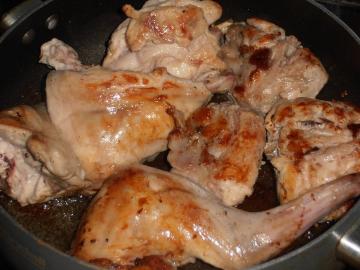 Juicy and delicious! The perfect dish for the holiday table.Ingredients:rabbit carcass2 onions300... 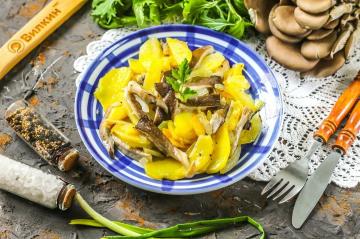 When planning to cook something light and hearty for lunch or dinner, opt for pan-fried oyster mu... 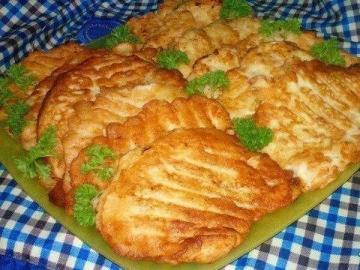 Today for lunch I had here such chicken otbivnushki that are prepared well, very simple. The resu...