With mushrooms cook issues have arisen: Returning from the Belarusian bogs family resort in unison chanting "

I had to get up to the plate.

My soup recipe is so "distorted" that in advance (with a certain pleasure even) look forward to the messages in kamentah a la - "do not write stupid things, Mushroom broth is poured can not "," you are my celery all messed up "," the soup is cooked exclusively with noodles and you can throw for nazhoristosti kartohu ".

Food turns out to be very scandalous theme - each defending his recipe as the only right one. Ladies and Gentlemen! I want to say that everyone has different tastes and mushroom soup recipe exists as long as the people of his brews. All the best - everyone - delicious, because everyone has the right to talk about her. I f you do not teach, yes, I share my experience. Because if itching where the sermon or write nasty, get nasty, and then scream, a rude author, dares to answer, you'll scratch - and go by.

Mushrooms boil, skim when they boil. Mushrooms pull, the first pour broth (because as they are not pure, it is sufficient mud).

Finely I cut an onion and rub grated carrots couple of reasonable size.

All this in a pan fry, adding... celery.

Yes, celery. Previously we did not do, but I decided to somehow try because like an interesting flavor that it gives celery.

More... boil water, it throws the chopped potatoes, and there - zazharochku.

Mushrooms our already welded cut, fry (to make brighter taste) and also send in a saucepan.

Straightening taste with salt, pepper and other spices What (if you like).

The main secret - when filing more sour cream, you can - with herbs. Bon Appetit! 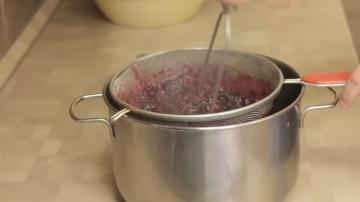 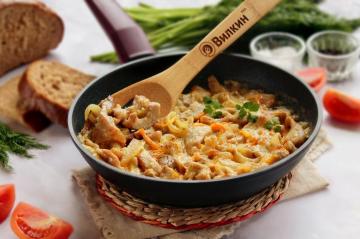 Pork in sour cream sauce in a pan

A sauce made from juicy pork pulp with sour cream in a pan and covered with a lid cooks very quic...

How to fry frozen dumplings in the pan

Dumplings - a simple and fast way to satisfy your hunger. Most often they are cooked. But some fo...