At the dawn of the construction of capitalism to our country came to Uncle Ben and his sauces in glass jars. I still remember the advertising of its sweet-sour sauce with sprouts (or stems) of bamboo. Terribly I wanted to try - what is this delicacy is, but worth a jar at that time some absolutely wild amount. The same wild, as Capitalism.

But it still bought, yes. And bought rice, which was supposed to boil snow-white and crumbly. Even a huge leg, which pretended to be a chicken, but judging by the thickness of the bones belonged to the bird-mutatntu. This leg of a caveman could use as cudgels for hunting mammoth, as it is now suspect.

All three ingredients together gave a very strange result. This result we ate with a very puzzled faces, wondering - was it worth it? Chinese sweet and sour sauce Uncle Ben (Uncle Bens, if someone does not understand what it was about) was a terrible dirty trick. The rice was tasteless. But the meat of the chicken legs barely chew, and taste it strange no bamboo shoots could not kill.

Even pity grew, and the Chinese, who invented the recipe for the sauce, and the Americans, who are so to him, preserved and enjoyed. The experiment had turned me away from Chinese food for years to come. Only a good ride on the world, he decided to try it, "the second time", already in its normal form. A try - love.

And, in general, let's repeat prescription of Uncle Ben. But without bamboo shoots (I have not), and the sauce, the same sweet and sour, do yourself. And take the normal chicken, right?

Thighs take meat because they have more suitable for this dish, rather than on the breast.

Cut into small pieces and fried in sesame oil. You can take any other - and sunflower, and olive oil, but I like it here sesame.

Fried? Passed on to the plate, we do vegetables. In the same pan, send onions and carrots

Then - red and yellow peppers, chilli and garlic

Honey and soy sauce mix, dressed with vegetable sauce, add to all this goodness our roasted

For greater authenticity in a separate pan fry the sesame seeds and sprinkle them with the supply of our meal on top. 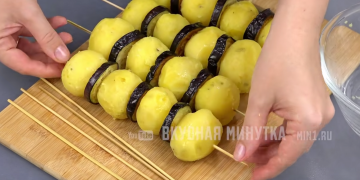 Tasty and very appetizing. "Skewers" potato. On the festive table will not go "unnoticed" 😊A prep...

Pumpkin cake. Relatives and friends will be delighted!

All used to that cake - it is something sweet. But vegetable delicacy turns worse. Especially now... 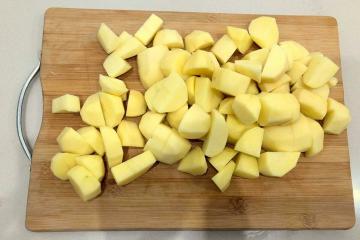 When there's no time to cook complicated dishes, these meatballs you sure help out, help you quic...