Dinner "of Baba Yaga": turkey with vegetables, stewed in a cauldron

Remember how in the Russian folk tales? It will be a good fellow to Baba Yaga or other folklore elements, yelling, pounding his fists on the tables, they say, swords all that is in the oven! And do not think before you throw, it is necessary in the furnace is "everything" to prepare.

What is fabulous folklore entry? But for this, the classic dish of the village, most likely, hard workers, which can be cooked in a pot, and to modernize it - in a cauldron.

I looked at all sorts of intelligent resources, trying to give the name of the creature, or to determine which group of food it can carry. Faced with the fact that in pre-revolutionary books, memories of the peasant way of life and less -working, something similar called "tusheninoy".

The basic principle of these dishes - satiety (I would even call nazhoristostyu) and ease of preparation. That is really "swept" into the pot or cauldron all that is at hand, it utushilos-evaporated, and let them once a day, but you get a hearty meal.

However, represent the past can be infinite, so get down to business - the very prescription.

As you can see, a simple set.

Turkey thighs I cut coarsely and lightly fry in a pan, that have formed the meat juicy and appetizing color.

In the cauldron to put the meat on top of it potatoes covered it with carrots and onions. All large cut, slices.

Mushrooms cut into two pieces, or throw in the frying whole. Again, I do this only to blush, and then sent them to the vegetables in large kettle.

Vegetables and meat are filled with water (and possible broth), well, water and salt the previously added thereto spices. Add salt and pepper as possible, while they were putting layers, but the water is absorbed better and get much tastier.

That's all! Kazan left in the oven for 1.5 hours at a temperature of 190 degrees. Then another half an hour at a reduced to 160 and the dish will just melt in your mouth.

It remains to put all of the plates, add a little broth, in which you dip fresh bread, and you can start ...

Let me remind you: Like Baba Yaga even enjoyable! 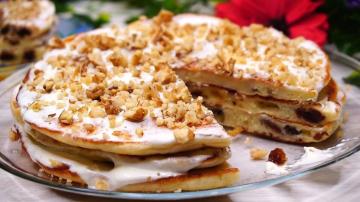 Grandma's pancakes with sour cream in a cake

Grandma's Breakfast for 15 minutes. Favorite taste of childhood! When I spent the night with her... 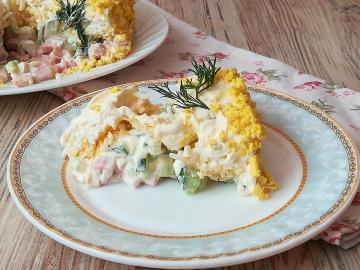 Today cook delicious simple salad of only 4 ingredients. All products are perfectly combined with... 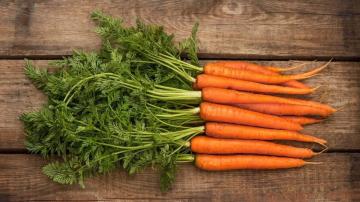 Freeze carrots for the winter by all the rules