If you think that the most famous apple pie - a pie, you are partly right. Charlotte is incredibly popular in Russia and the former Soviet Union. And what is made from apples in other countries? Let's investigate.

Today I want to tell you about apple pies, which have become famous not only at home, but also around the world.

And what apple pie is your favorite? Tell us about it in the comments.

apple pie popular in our country initially did not like was the fact that we are now accustomed to cooking. Charlotte prepared from Savoiardi pastry and custard.

Our usual apple pie appeared in Stalin's time, and at first was called "Russian grandmother". Charlotte as it became known, as it was similar to the German apple pie (see. point 3).

Shortbread dough breeze (chopped) and a lot of apples. That's the whole secret of the popular US apple pie. Apparently, because of its simplicity and the cake was the people's love.

This cake is served in the United States everywhere. From roadside eateries and MacDonalds and ending expensive Michelin restaurants.

Make repost itself to the wall so as not to lose the article!

Germans - the people and saving your apple pie prepared from the remnants of bread. The dried bread soaked in egg mixture and laid into the mold. For the filling sliced ​​apples, then coated with "egg bread" and bake.

In pre-revolutionary times of the Germans in Russia lived quite a lot, and the Russian was called the German ladies - Charlotte. Therefore, apple pie called charlotte.

The Dutch version of apple pie is somewhat similar to American Pie. Only on the basis of preparing dough. In the filling, in addition to apples, included raisins and cinnamon. A bottom dough to not elapsed from apple juice, it is sprinkled with breadcrumbs or deposited a thin layer of biscuit.

I think that the Bulgarian version of the apple pie was invented by a very lazy person. Pie "3 glasses" - the laziest of all that I know.

Its very easy to prepare and do not even need anything to shake up. Cake consists of several layers of dough and apples.

Apple pie recipe in my blog:

Pie with a crisp and juicy apples

Fried mackerel in a pan

Preparing a delicious sea fish dish is not difficult if you have one available, such as fried mac... 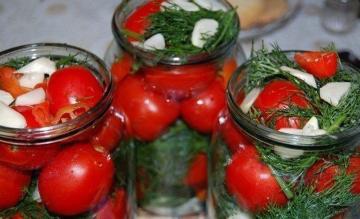 For winter tomatoes with onion and garlic "Yum"

Very beautiful and delicious salad that will decorate your holiday table, and the guests will def...