Buckwheat - is delicious. How to choose the rump

You know, more and more often confronted with the fact that a good buy buckwheat - just yet impossible quest, but on the shelves product is presented, as they say, in the range. Probably, many faced with the fact that once upon a time, when the grass was greener, the sky - blue, people - kinder, the country was known as the Soviet Union was buckwheat... what else. Tastier. Really delicious.

Why is that? Let's face it.

To begin with talk about how to choose the buckwheat. Clarify that this is a buckwheat-Unground buckwheat, and not on and not slipped on the rump "Smolenskaya" (very finely ground buckwheat)

Here in the course are exclusively sensory characteristics.

1. Buckwheat should be dark

2. Buckwheat should be well so powerfully smelling buckwheat

3. In buckwheat should be a little debris - that is, split grain, any impurities and other bad things.

Basically everything except the color applies to slipped, and croup.

The color and smell of buckwheat say how she would have pronounced taste. If buckwheat light - then it was purified again after roasting, and taste dishes from such raw materials will be flat, unsaturated.

Here's a - we do not take. Light, and even chipped.

Here buckwheat almost looks as it should. It is understandable - the photographs filters, but the general direction of the transferred right

Rubbish - the same Quality Score. If the manufacturer prepackaged not understand that, what if he has the product?

By the way - I once wrote that Russia does not grow good, really tasty rice. So - with buckwheat everything exactly the opposite. It is better to buy domestic. It croup, which, though come to us from the southern side - from Byzantium (and even earlier, in Byzantium - from India and Nepal), it has long been a native Russian. Imported - Quality below, taste worse. Especially if it imported - from China.

Its easy to identify by sight: the Chinese buckwheat is a pronounced difference in the size of the grains, it is very light in color.

But what if you want to buckwheat, and so - and to little dark and smelled of buckwheat so that drools - did not find?

Remembering the technology of our mothers and grandmothers and. They coped with buckwheat in those days, when it was sold by weight, and the presence of debris in the bag was thought - ah, fie, a trifle.

We do again. Groats iterate, throwing out all unnecessary.

Do two - it was washed abundantly relentlessly washing away all the excess - something that will float on the surface.

We make three - themselves vyzharivaem buckwheat in the oven, spreading a thin layer on the sheet. That's when it becomes brown, and all over the kitchen will float wonderful buckwheat flavor - then you can cook porridge. For any recipe! And will he actually delicious.

Sauerkraut salad is not only very budgetary, simple and quick to prepare, it is also very healthy... 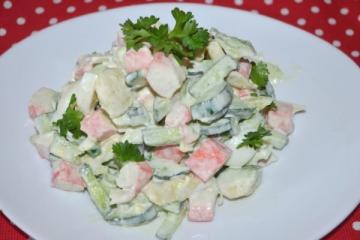 Awesome tasty salad with crab sticks and avocado! You will cook it for all holidays!

I share with you a recipe for another bombicheskogo salad with crab sticks. The taste is simply a...

Lush pie with apples in multivarka

All owner and owners multivarok dedicated ...Prepared for this recipe charlotte gives a very lush...