Fish "pie" in a pita: Dinner in a hurry

As soon as a thin pita do not use in our kitchens. All kinds of rolls, and dozens of options home shawarma, or here - cakes (cakes or almost), but without baking.

Not long ago, a child learned the basics of cooking (on their own). I go to the kitchen - I can not figure out what smells? Son of hard watching that proshodit in the microwave. It turns out that my future chef zabatsal himself a cross between a roll and shawarma.

- Do not slipnetsya? - I tried to appeal to the mind of the experimenter me. An appeal was to no avail.

-Not-a! - he replied cheerfully, and at this point shawarma made not less than cheerful "boo." What of the ingredients was in the "Buch" to blame, it is still unclear. Looks like marshmallows... At least, it was his cook long afterwards otshkryabyval with microwave walls.

Since "Bukhov" no more and no small, we do not want to prepare our "cake" Turn the oven.

While it heats, fry mushrooms in a pan and add the onion to it, and a little later - grated carrots.

At the very end - the chopped tomato and sweet pepper

Then baking dish lay a pita bread (or two, then as someone like) and put on the bottom of almost all of the resulting vegetable zazharku.

Bashfully prikroem fillet with vegetables, and to all of them it was not boring, add the grated cheese on top.

Now all this wealth wrap the free edges of lavash and smazhem beaten egg) firstly gloss, and secondly - not broken up until all baked).

We put in the oven at 180 degrees for 35 minutes and viola - dinner ready. Ah yes, the layout of memory products: 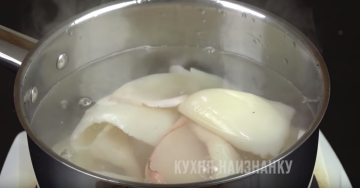 How to cook so that the "sole" does not work out: I cook squid for salad (two proven methods)

For squid salads, I usually need boiled squid. How easy it is to peel and boil squid, I'll tell y... 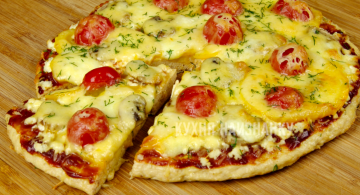 Meat pie without dough! Delicious! My boys call it "meat pizza" 😊You can choose the filling to yo... 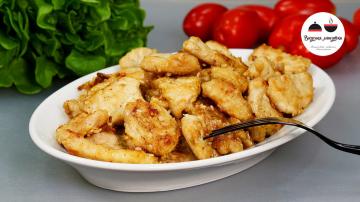 I haven't managed to get a juicier fillet yet! The recipe is very successful. Deliciously delicio...