Again buckwheat. Cutlets "What a joke" out of it, darling

I like the old anecdote about the English lord. The Lord asks his butler:

- Berimor, and that today we have for breakfast?

- Berimor, and that today we have for dinner?

- Berimor that we have for dinner tonight?

I recently with buckwheat doing. I remember that at the end of last year my family in a woman's voice declared that it is time to pass on a healthy diet: kurogrud steam and buckwheat without salt. Buckwheat was purchased. And so you think? April in the yard, and its remnants and are in the closet, because the salt-free buckwheat - a mockery of the body ...

But if you mix with salt, but with meat - it is possible. Do you agree? Then a new recipe. Recipe Grechanik. It's almost like patties of oatmeal, but with stuffing and buckwheat.

Grechanik in principle, known in Russia for a long time. They fashioned cooks who do not even think that little Volodya Ulyanov, think about the fact that they will be able to govern. Sculptured, most likely, not because of minced chicken, but... We are people of the twenty-first century, we take that progress will send.

This time he sent us:

• Well, the salt and pepper of course

Buckwheat boiled in a double boiler, boil three eggs (remember, only three, the fourth we need!) At the plate, but in the meantime everything is cooked, shred the chicken breasts in the stuffing.

Onions fried in a pan, add it to the stuffing, then, there, in the meat, pour the cooked buckwheat and trying to drive that thing left a raw egg.

Chop the boiled eggs with herbs (it will be filled)

Well, on a technical matter. The buckwheat-minced chicken wrap foliage, ship to pan and put in the oven at 190 degrees for about 45 minutes. On the table is served with a light vegetable salad and the phrase: 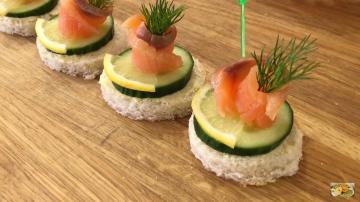 Snacks take pride of place at the banquet table. I suggest to cook four options are very original...

Breakfast in the bag for 10 minutes, the children love!

Today, cooking is very simple breakfast for the whole family, especially he is likely to appeal t... 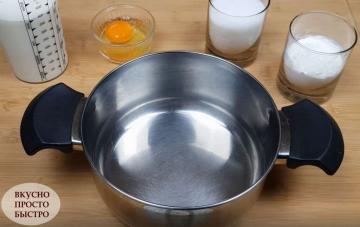 Ice cream cake in a new way. Simple and tasty cake to your home drinking tea

I made this simple chocolate cake just like that, it can be said in honor of the start of the wee...