The only right recipe for borscht "Moscow" - in technological cards, which used to be designed for catering (well, probably in books about tasty and healthy food since the Soviet Union).

It so happened that the books I have now on hand there, but debater, proving that there is no "Moscow" borscht does not exist - there.

That is why today we about Borsch.

In fact, this soup recipe - a great variety. How many chefs as housewives, and so much the right recipe borscht. Because different families soup like different: somewhere pokislee somewhere - go for the gusto, where something more is added tomato, and somewhere - beet.

There is a soup with potatoes and without, with beans and meat balls, there is even no cabbage - all borscht.

Then why am I writing about the "right" recipe is Moscow borsch? Well, probably because the recipe is recorded. As well as the recipe for borscht Kiev. Or Poltava.

So, what do we offer a flow chart layout for products?

In - First, we need the broth. Five liters of water take 2 500 kilograms of beef bones and cook. Long cook.

Bone, washed and chopped into pieces 5-7 cm in length (vertebrate bone marrow is removed), pour cold water, brought to a boil, the foam was removed and boiled under weak reflux for 3-4 h, periodically removing fat. For 40-60 minutes before end of cooking vegetables put into the broth. Ready broth filtered.

But the technological map of borscht elaborates:

the broth is cooked with the addition of bone svinokopchenostey. All the vegetables are chopped, stewed beets, carrots and onions Passer. Cooked meat, ham, sausages are cut one piece per serving, pour broth is adjusted to a boil, provari¬vayut 3-5 min and placed in a soup during tempering.

Absolutely you confused cleverness? Then will easier. The first and main prescription nuance - is the lack of potatoes in it.

Just in case I did a screen layout:

Beets in "Moscow" soup shinkuem sticks in a saucepan or skillet passeruem it 5-10 minutes to caramelize. Then add it to 30-50 ml of vinegar and in the end - 100 grams of tomato paste.

How to take the beets? Three things, if they are not overgrown.

There also put a couple of tablespoons of sugar, salt, black pepper, 3 large bay leaf and pour a couple of ladles of broth. Cover with a lid, leave to stew on the hour and a half.

When the beet is almost ready - it was the turn arrow. It cut into half rings, fry in vegetable oil.

To roast the onions chopped straw send a couple of carrots.

Then we undertake the cabbage. Half a small head of cabbage cut. Yes, straws. The main rule - cutting vegetables should be about the same. To cabbage smell cabbage, scalded her with boiling water.

Bring to a boil our broth and cabbage in his ship. Fifteen minutes later - browned vegetables. And just before the end - beets with all the juices in which it tushilas.

The final touch: sausage cut into portions, warm up their few minutes in the soup and even then poured into plates.

Do not you think that homemade recipes - with lots of meat and other goodies, such as... will be better? 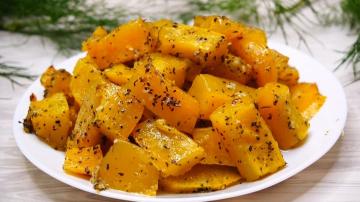 Pumpkin baked with garlic and basil

Who first tried a pumpkin at my house always said: "I did not expect it would be so good!". And p...

I disclose the technique: how to give your eyes a young outlines (ideal for elegant age)

Hello, dear readers of my channel. Today I want to tell and show how easy it is quite possible to... 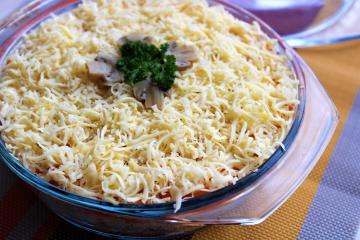 Very tasty and easy recipe saved me once. When you do not know what to cook, then I think of him....