7 wrappers of chocolate Alenka, which we will never see in the store 🍬

In the USSR, there were more than 100 wraps to a chocolate Alenka. Since then, the country has changed, and now wrapper was left alone, which we know well.

You know, it looks like a chocolate wrapper Alenka? Of course, you know. This is the most recognizable chocolate in our country. And all thanks to the fact that the picture with the wrapper has not changed for many years.

But it was not always so. In the USSR, brand Alenka has not been assigned to any particular industry. Any chocolate factory could make your design.

Thus in the USSR there was a large number of chocolates with the same name, but sometimes completely different design. Chocolate taste no different, as they are most often prepared by a unified state standards.

Today will discuss the 5 wrappers which I found. If you like this theme, place Like, so I'll know whether to write on this subject anymore.

5 wrappers of chocolate Alenka, which we will never see in the store

1. 100 gram slabs, which are produced in the city, which no longer exists. More precisely, the city exists, but is now called Bishkek. The price of 80 kopecks.

Wrapper, in my opinion, it stands out from the others. I would now be happy to buy such.

2. Custom tile, weighing 130 grams. Such weight to the Soviet chocolate I see for the first time. It made at the Red October in Moscow. Price 1 rub.55 cop.

This can be bought in 1984. But closer to the restructuring often began to use already familiar to us design.

3. 50 gram tile Alenka. Year of production could not be found, but, apparently, the wrapper is made in honor of the woman's flight into space. Made in a chocolate factory in Novosibirsk. The price of 43 kopecks.

Initially I thought that the wrapper made in honor of Gagarin's flight, but if you look closely, you can see the braid and bow. And the face is more like a woman's. Perhaps in honor of Valentina Tereshkova.

4. Bright wrapper of unknown origin. Alenka, in my opinion, there's like a resident of Yakutia. But this is only my opinion. Price is not known.

Wrap turned out bright, I think, at one time it sold well.

5. Although the release date of this wrapper is not known, something tells me that she had been in the nineties. Or I'm wrong? Price is not known.

6. 50 gram bar of chocolate, which is produced in the city of Gorky. I like this design reminded somehow Pushkin's fairy tales. And you? The price of 43 kopecks.

7. Unfortunately the picture has got me in a bad quality and most of the information can not be read. But I was surprised by the name. It is written as "Olenka". Perhaps an attempt to copy the idea.

These are the wrappers from chocolate Alenka existed in the USSR. What you liked the most? Leave the number in the comments!

How do I make chicken aspic without gelatin. favorite recipe

I want to share my recipe aspic of chicken who loves the whole family. I cook it without gelatin....

How do I make tasty meat gravy. Suitable for any garnish

When I do not know what to cook for garnish - always do the meat gravy sauce. It is ideally suite... 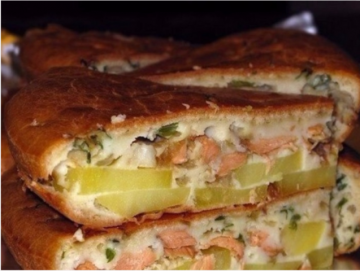 I share the recipe pie filler. As a filling we use fish and potatoes, so our cake will not only d...