That was served for dessert in the Soviet cafe. Menu and prices

I was born in the USSR, but my childhood was spent in times of restructuring. While cafes and restaurants opened and closed virtually daily. But in Soviet times for the majority of the restaurant was a luxury.

As a child, I often ran into a small cafe "Fairy Tale" and examined, there are different cakes. I remember that there were presented donuts, eclairs and meringue with cream. And now I was wondering what kind of desserts served in the Soviet cafes and restaurants.

My parents did not go to the cafe, but remember that there could be served as a dessert just "sour cream and sugar." Therefore, I few days of surf on the internet and found a menu of several restaurants.

If you grew up in the Soviet Union, and you happened to be in the Soviet cafe or restaurant, tell us in the comments what you remember the desserts. I will be grateful.

The dessert menu - boring. Basically it represented jam and ice cream. Now I would not go this restaurant.

My parents told me, at this café wanted to get every student in Moscow. The dessert menu looks small, but there was also a cake, and a variety of pastries. And also you can try whipping cream with various fillings.

Now, the café Lira is the first McDonald's, which opened after the collapse of the USSR.

In addition to ice cream, which is presented in a large assortment, the cafe could try a variety of cakes and sweets.

The most surprising is that in almost every cafe I watch in the candy menu Kara Kum. They had some kind of special?

When preparing an article, it struck me that there are dishes such as sour cream with sugar and without, as my parents were told the menu. Since I did not find any dessert menu, I decided that they could serve as a sweet.

The dessert menu is scant. But funny that as a dessert, you could buy a kilo of apples just 1.5 rubles. I do not even know a lot or a little. Who knows, to share in the comments.

Unfortunately, I could find only one page of the menu of this restaurant. It appears that in Metropolis as desserts served mainly fruit baskets and ice cream. But it's better than nothing.

About this cafe I told the wife. Her classmate showed off at school, that they with their parents almost every weekend went there after a walk in Gorky Park.

This cafe is a small thing that has existed so far, but also grew into a huge network of stores across the country.

Menu I liked the most. Here was a paradise for the sweet tooth of the Soviet.

I do not know whether this is so, but judging from the menu that I could find in the Soviet cafe is not very bestowed desserts. Ordinary food was presented in abundance, but the sweet, apparently, prefer to eat at home.

P.S. By the way, tried to whip the cream with the sugar in the restaurant Cascade, it came out very tasty. The main thing - to take fat sour cream and sugar can be added to taste.

Why I stopped buying desserts at the store. says confectioner

All you need to know to cook a cake, "Milk girl." A simple recipe of German classics

Cooking delicious salad with canned pink salmon! Salad turns out hearty, and so has the name "Men... 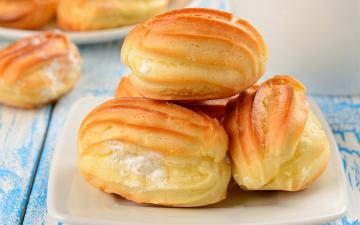 Custard with cream and honey for éclairs, cakes or other baked

Amazing cream! He's just perfect! With him any dessert will be a masterpiece!Ability to prepare ...

For weight loss and for those who are fasting - this soup will be a lifesaver.I love tasty, healt...